I’m editing the manuscript of a first-time novelist. The story line is good–it has mystery, suspense, intrigue, humor, and a fast pace. And yes, Kristen Lamb, several murders take place.  The manuscript held my attention all the way through my first reading.

But…here’s the but. The writer leaves out important details about location and the names of a few minor,

but still important, characters.  He resorts to using vague terms when specific ones would help the reader.

The opening action of the story occurs at a “university” of unknown location. No clues whatsoever to country, state,  or city. References to mountains suggest that the location might be somewhere in the West, but that’s a guess.

The main characters in the story have names, but minor characters become simply “the man,” “the monk,” “the girl,” “a person.”  In a number of paragraphs, the writer repeats the words “the man” and “the girl” multiple times in the same paragraph. That gets boring. Those paragraphs need rewriting.

After reading a few chapters, I recalled this quote by Roy Peters Clark.

At the St. Petersburg Times, editors and writing coaches warn reporters not to return to the office without “the name of the dog.” That reporting task does not require the writer to use the detail in the story, but it reminds the reporter to keep her eyes and ears open. Writing Tools: 50 Essential Strategies for Every Writer by Roy Peter Clark

Details are important. You may not use all of them, but collect them. Give “the man,” “the old man” and  “the monk” names, especially when they appear in multiple paragraphs. Or give a distinguishing characteristic: a bald head or a visible tattoo. This will help readers keep characters straight in their minds. Who is talking? That will be clearer if you give the character a name when he first appears in your story.

Of course, not all the minor characters need names. Sometimes “a man passed by without noticing the damsel in distress….” If this man is a one-moment character, he does not need a name. But if this man takes part in a multiple-paragraph situation in a critical chapter, he needs a name.

So when writing about minor characters, give them names if they have more than an incidental role. You will help the reader stay linked with your story. And don’t forget the dogs. They need names, too–just like Max, the driver in the photo above, and his buddy, Jake.

Janice Heck is coauthor with Chaplain Bob Ossler of Triumph Over Terror, a book about Chaplain Ossler’s experiences at Ground Zero after the terrorist attacks on September 11.

Who Murdered Those Poor, Pitiful Adverbs?

Woohoo. There’s quite a bit of mud-slinging going on over yonder about adverbs, of all things. 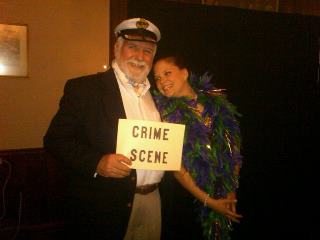 What with being called all kinds of dubious, diminishing, and insulting names on Internet, like “ad-thingies,” “the red-headed stepchild of modern grammarians,” and “weasel words,” it’s a wonder adverbs don’t have an inferiority complex. Oh, wait, in fact they do exhibit previously undiagnosed, partly paranoid tendencies, probably because their feelings get hurt so frequently.

Not only do Internet writers negatively brand these mild-mannered modifiers with negative descriptors, but well-known writers label them with such loaded nomenclature as “flabby words” (Hale)  “stinkers” (Casagrande), and a “ragbag of hedges” (Kilgarriff). They have been called monsters and beasties, too.

Others fling disparaging remarks like flaming firecrackers tossed by taunting teenagers. Not only are adverbs “useless,” but they are “truly useless,” and “redundant.” Gordon calls them “yawningly predictable,” and Zinsser calls them “unnecessary.”

Adverbs are “crashers in the syntax house party” and “trash words” (Hale), “the dustbin” of English grammatical categories (Crystal), “the old worn-out clasp which holds words together” (Folejewski, quoted in Nordquist), “the poor stepchild” and the “Rodney Dangerfield of the parts of speech” (Nordquist).

Adverbs have even been called promiscuous because they have multiple partners: verbs, other adverbs, adjectives, and whole sentences. (Hale).

Mark Twain hated them and called them a plague. Stephen King hated them and jumped feet-first into the fracas ranting that “the road to hell is paved with adverbs.” Adverbs, he says, are like dandelions that totally, completely, and profligately cover his lawn.

(These guys are a bit melodramatic, don’t you think? Besides that, these frequently repeated quotes are becoming trite and clichéd. Enough already.)

Indeed, some published “immature” writers have been castigated for using weak verbs and redundant adverbs in their money-gushing published novels. Of course, these writers have no worries about such criticism; they are busy counting the mega moolah that arrives by railroad cars at their multi-million dollar mansions. They sip their martinis shaken, not stirred, on the veranda by the pool, thumbing their noses at those snobby don’t-use-adverbs critics.

I mean, if you were J. K. Rowling, wouldn’t you have the pompous and malicious Dunsley family (the miserly stepparents in Harry Potter and the Sorcerer’s Stone) describe themselves as “perfectly normal.” Fits, doesn’t it. Come on, where’s your spirit of fun?

Criticizing adverb use is akin to criticizing Strunk & White; it’s the popular thing to do. Both are juicy targets, ripe for criticism. S & W give simplistic advice (avoid the use of qualifiers…), and adverbs can be simple and trite.

Whoa now…. Let’s just stop and take a breath. With all this maelstrom of adverb criticism, do writers even dare to use them?

True. Writers do misuse adverbs, especially the –ly brand and those linked to “said”, but is that any reason to banish all adverbs to Stephen King’s fiery furnace? Why all the melodramatic fire and brimstone? Why all this bullying of adverbs?

Adverbs can be badly, awkwardly, redundantly, and even outrageously used by writers, but possibly, just possibly, could adverbs have any good qualities?  Must they always be demoted to being the poor, pitiful underdogs in the linguistic world?

Critics focus on the minor crimes of adverb abusers and ignore the benefits that well-behaved adverbs freely and willingly offer to the world. Adverbs have a proper place in writing; in fact, we can’t do without them.

Why should writers care about adverbs?

Adverbs affect writing style, yes, for better or for worse and happily ever after. Selective use of adverbs creates well-crafted writing while indiscriminate use creates tedious, clichéd writing. Adverbs can bring subtle distinctions as well as major, dramatic distinctions. And besides that, clever use of adverbs makes me chuckle.

But make that an apple-blueberry-peach, honey nut Cheerios ice cream sundae with Heathbar–crunch-topping adverb, and you 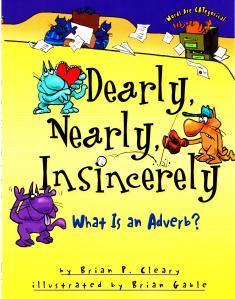 have a different story.

“Adverbs add character, sizzle, and fizz to your phrase or your sentence, whatever it is!” Brian P. Cleary, Clearly, Dearly, Nearly, Insincerely: What Is an Adverb?

What is an adverb anyway?

Adverbs are a category of words (a part of speech) that can change (qualify, limit, describe, modify, intensify, minimize) the meaning of verbs, other adverbs, adjectives, phrases, and clauses.

I know. You learned that in third grade. But think about this: Anything that has the power to change something else has….power. Take hold of that power and use it wisely.

Take a gander at the following Zombie treats dissected from Kevin J. Anderson’s, Death Warmed Over, and slobber over the adverbs he uses.

Most humans are morbidly fascinated by the dark side of the city.

“Amazing what morticians can do these days, but I’m still only fit for the scratch-and-dent sale.” I tapped my brow, feeling the putty that Bruno had so skillfully applied.

The mummy spoke in a crisp Bristish accent, “So sorry I’m late. My sundial is notoriously unreliable on cloudy days.”

We assert that all spells published by Howard Phillips are completely harmless. Although Ms. Wannovich’s situation is unquestionably tragic, our good company bears no blame for the aforementioned misfortune.

I had been inside the factory before—illicitly—while investigating the garlic-laced shampoo lawsuit.

To tell the truth, I never liked Zombie stories before I read Anderson’s Death Warmed Over. It is the perfect type of writing for tongue-in-cheek use of adverbs.

Use adverbs, but use them wisely. Crime scene closed.

I clearly, dearly, and sincerely approve this post. Now may I go back to my nap?