Blame It on the Derecho

Late afternoon/early evening thunderstorms are common in Southern New Jersey in the summer during periods of hot and humid weather, but they don’t usually last long or cause any damage. They put on their light-and-sound show, drop a little rain, and blow over relatively quickly leaving much appreciated cooler air behind.

That was not the case on June 30, 2012, when a severe thunderstorm/wind system hit our area with disastrous results. Our local weatherman, Dan Skeldon, called it a derecho (duh-RAY’-choh).

A derecho is a fast-moving, wide-spread band of thunderstorms with wind gusts of more than 58 mph along a squall line of more than 240 miles. Derecho winds can exceed 100 mph and can cause extensive damage. This derecho reportedly was equivalent to that of an F-1 tornado. 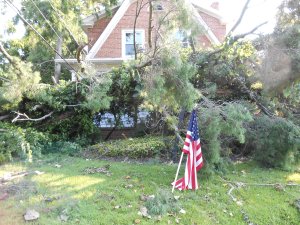 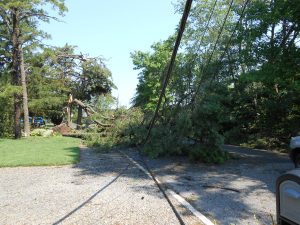 Derecho is a Spanish word that means direct or straight.  In this case, it means straight winds as opposed to spinning and twisting winds as in tornados. Sustained winds of up to 50 mph-60 mph as well as groups of wind microbursts and downbursts (70 to 80 mph or more) pummeled the area. Local evidence shows that the wind bursts seemed to hop, skip, and jump over areas. Majestic pine trees in one area (Route 40 near Atlantic Ave.) snapped and splintered at various heights while the next block of trees appeared totally unscathed. This pattern repeated itself in many of the woodsy areas in Southern New Jersey. 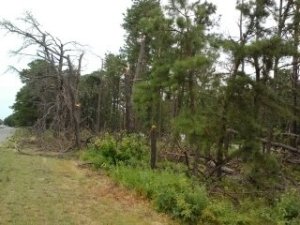 The area of damage was widespread. Friends reported similar damage in Ohio. (See more reports and pictures of local damage in The Current of Mays Landing and The Press of Atlantic City.)

This storm formed in the Midwest and raced across fourteen states before hitting the Atlantic coast (New Jersey down through Richmond, VA) just thirteen hours later. Watch this hourly time lapse video of screen shots from  Weather Underground that shows the speed and direction of the storm movement. Notice how the storm intensified as it hit Southern New Jersey.

The derecho hit the Southern New Jersey area in the dead of night (1 am) with wind gusts over 70 mph. More than 200,000 Atlantic City Electric customers (40% of ACE customer base) lost power because of high winds, fallen trees and utility poles, and downed wires and transformers. We lost power in my neighborhood for almost six full days. My sister, thirty miles away, lost power for seven days.  All remaining communities had power restored by Sunday, July 8th, eight days after the derecho.

Property damage to cars and buildings was random but significant.  One resident of neighboring Egg Harbor Township was out in the storm on Main Street in Mays Landing when a tree fell on his car. Thankfully, he and his two passengers managed to get out of the car safely.

At least eleven roads had to be closed in our area, including Route 50, Main Street, the main route through Mays Landing, NJ. 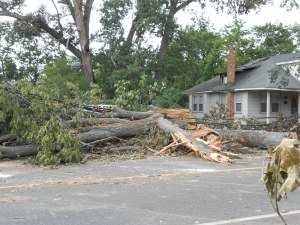 Gas stations throughout the area were closed because of loss of electrical power. Our local WAWA opened up within a day of the storm running on a giant generator. Word spread fast in our neighborhood that WAWA had hot coffee and gas (sorry no deli) on Sunday morning. Our neighbor brought us coffee and donuts at 7:30 am! How’s that for service? (Thanks, Beni.) 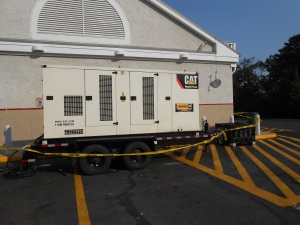 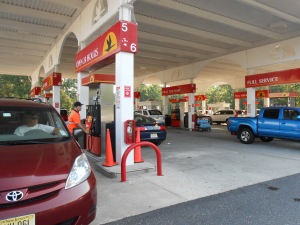 This tree (below) blocked access to my sister’s house in Vineland, NJ. The fallen tree pulled down transformers, utility poles, and electric and telephone wires. Their street reopened six days later. 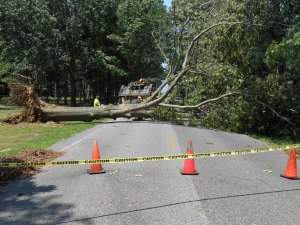 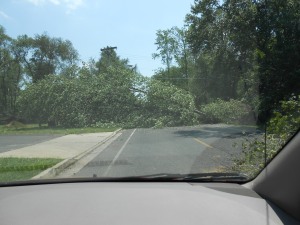 The worst effects of the storm were fatalities. Two children lost their lives when a tree crashed on their tent as they camped in Parvin State Park. Several other storm-related deaths occurred.

Because the storm essentially destroyed Memorial Park in downtown Mays Landing, our Hometown Celebration scheduled for June 30 had to be cancelled. Tents, tables, and chairs set up the previous evening blew away in the heavy winds. (We will now hold our big town event on July 28.) 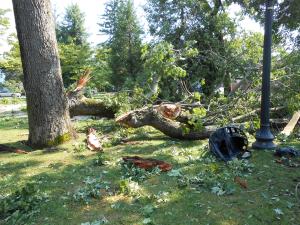 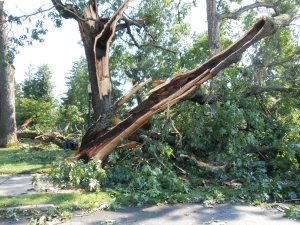 We sustained only minor damage at my house. Two tree limbs fell in my backyard, but the birdfeeders remained intact.

We are thankful for the 1500 plus workers who arrived in convoys of electric utility and tree service trucks. We noticed license plates from Ohio, Pennslvania, and Maine, as well as many trucks from other areas of New Jersey. The utility companies have an agreement to help each other in emergencies, and it was amazing to see how well this worked. 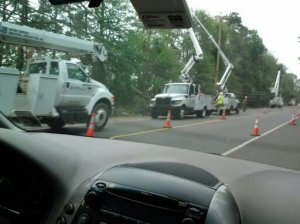 Workers gathered by the hundreds at the Atlantic City Race Course in Mays Landing at mealtimes where they were fed by a catering company. They slept at night on the floors at the power-less Richard Stockton College. Local citizens picked up ice and bottled water at the AC Race course handed out by volunteers from the local Community Emergency Response Team.

And, of course, we all had to throw out everything in our refrigerators and freezers. The week became known as the “Great Refrigerator Clean-Out Week.”

Despite all the inconveniences of this past week, we all have a new word in our vocabulary and a new topic to discuss while sitting around the pool: derecho.

There was one other minor casualty of the derecho: my blog. Without my computer, I was not been able to post anything this past week. I blame that on the derecho! I’ll catch up this week, I promise. In the meantime, we are paying closer attention to thunderstorm warnings!

11 thoughts on “Blame It on the Derecho”